With 104,000 inhabitants, Siegen is the largest city in South Westphalia and at the same time the economic and cultural centre of the region. Trade and services supply 600,000 people in the catchment area. Steel processing, mechanical and plant engineering are the most important economic factors. The city’s largest employer, however, is the University of Siegen with over 2000 employees. At the latest with the foundation of the campus „Unteres Schloss“ the University of Siegen gives important impulses for the urban development in Siegen. In cultural life, teachers and pupils are not only welcome visitors, but also actors with creative influence in institutions such as the „Apollo-Theater“ or the „Museum für Gegenwartskunst“. The gradual move of the university into the city, newly designed recreational areas in the inner city and a growing club and gastronomy scene increase the urbanity of the city of Siegen, which, incidentally, is regarded as the greenest city in Germany. We wish you a pleasant stay!

Due to the high ore deposits in 700/600 BC, the Siegerland was predominantly populated. Some iron smelting sites can be found in today’s Siegen area, such as melting furnaces in the Engsbach soap near Achenbach. The name Siegen goes back to the possibly Celtic river name Sieg. The first documentary mentions of the place Siegens „Sigena“ come from the years 1079 – 1089. Around 1170 the first coins with the designation „Siegensis citivas“ (city Siegen) were minted by Rupert, bailiff of the principality Mainz. This inscription indicates that Siegen already possessed city rights at this time. The son of the Vogt, Dudo von Laurenberg, is considered the founder of the family of the counts, later princes of Nassau. In 1224 Archbishop Engelbert I of Cologne attempted to successfully strengthen the sovereignty of the Archbishop. This was done on behalf of church courtyards, by building castles and founding cities. In 1224 the counts of Nassau handed over half of the city of Siegen to the most influential man of the empire, so that a double rule of count and runner occurred. This double rule lasted until 1414. In the 16th century the town was surrounded by 16 towers and three town gates and had a mighty castle. From 1530 the Reformation and the transition to Calvinism began. After the Battle of Leipzig Wilhelm Friedrich, Prince of Orange, took over the Siegerland again in December 1813. In 1815, however, he passed this on to Prussia in exchange with the Grand Duchy of Luxembourg. Through this unification the historical ties to the south were dissolved and the Siegerland was adapted to Westphalia. During the Second World War, 90% of the buildings and apartments were damaged or destroyed. All bridges over the victory were blown up by the Wehrmacht. After the end of the fighting, the US combat units handed over the city to the British military administration on April 9, 1945. On 1 January 1984 Siegen was merged with ten other communities under the name Siegen-Wittgenstein. Since the 2014 census, Siegen has achieved metropolitan status with 100,325 inhabitants.

The Siegerland, with its narrow valleys and rather harsh climate, offered few opportunities for agricultural use. In the Middle Stone Age people used the wealth of forests and game for hunting and gathering. From about 650 BC onwards, the near-surface ore deposits, the abundance of water and the extensive forest were used as good settlement conditions. Ground finds such as clay vessels, iron tools and an Iron Age melting furnace from the La Tène period around 200 BC indicate extensive smelting in the Celtic period.

Today, the university town of Siegen with over 105,000 inhabitants is a cultural and economic centre in South Westphalia. Around 600,000 people live in the catchment area, which extends beyond the borders of Hessen and Rhineland-Palatinate. In the fastest growing region of North Rhine-Westphalia there are many so-called „hidden champions“. Above all, the local economy is characterized by medium-sized companies, their employees and well-trained specialists from the region. Areas such as mechanical engineering and metal processing are the backbone of industry and offer good career opportunities. The large university and the business school ensure that tomorrow’s managers are always trained here. This is why the region, with its diverse, intensively networked education landscape, occupies a leading position in the education sector. Compared to the rest of the country, the unemployment figures in Siegen-Wittgenstein are lower than almost any other region. 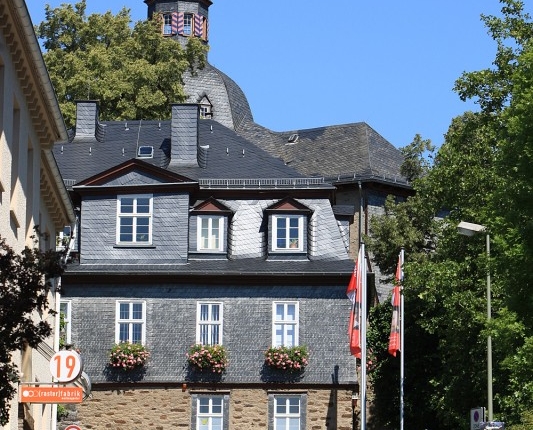 The medieval castle on the hill was probably built around 1200. It was first mentioned in writing in 1259 and since the 18th century it has been known as the “Upper Castle“. Until the 15th century, the estate was divided between the two sovereigns, the Archbishop of Cologne and the Count of Nassau. Since 1421 the Catholic counts of the house Nassau-Siegen had the sole rule over the city and the castle. Today’s castle is essentially from the 16th and 18th centuries. Since 1905 there have been collections of the Siegerland Museum of Art and Regional History. The heart of the Upper Palace is the Rubens Hall, in which eight original paintings by the baroque painter born in Siegen can be seen permanently. A collection of portraits of Nassau rulers can be seen in the Oraniersaal. 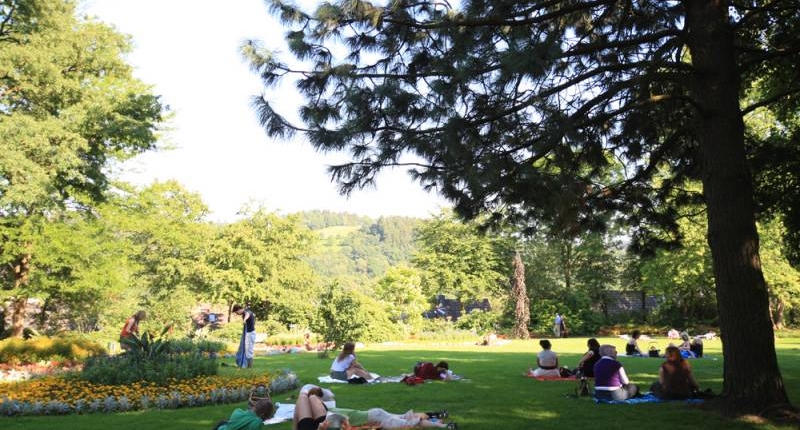 The castle garden extends over 16,000 m². After the city of Siegen had acquired the castle and its grounds from the Kingdom of Prussia in 1888, it became a civic park. Today the park is used as a place for recreation and leisure as well as for cultural events. Particularly worth seeing are the splendour of the flower beds and the partly exotic tree population. Former fortress towers serve as vantage points with a beautiful view of Hüttental and Kaan-Marienborn. 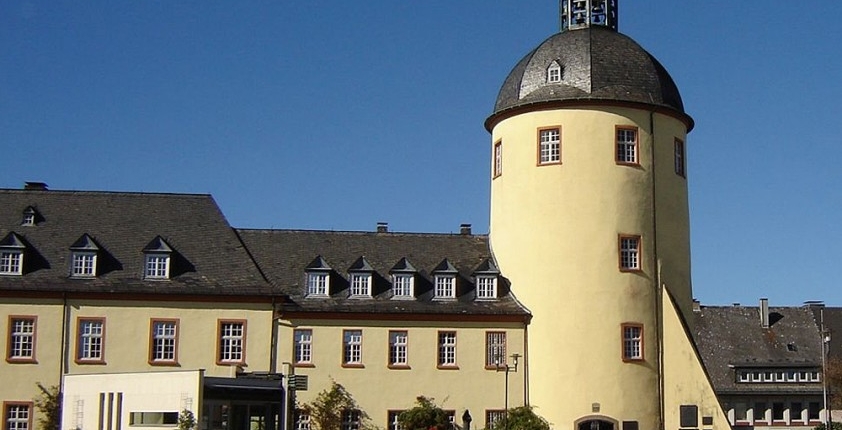 The palace was built between 1695 and 1720 as the residence for the Protestant Prince of Nassau-Siegen. The first drafts of the three-winged complex still originate from Johann Moritz, Prince of Nassau-Siegen. His mortal remains and those of his family are located in the princely crypt in the central part of the palace complex. After the Congress of Vienna, the palace lost its function as a princely residence and has since served as the seat of the provincial authorities. After the reconstruction in 2013, the buildings are now used by the Faculty of Economics of the University of Siegen and the Südwestfälische Mittelstandsakademie. 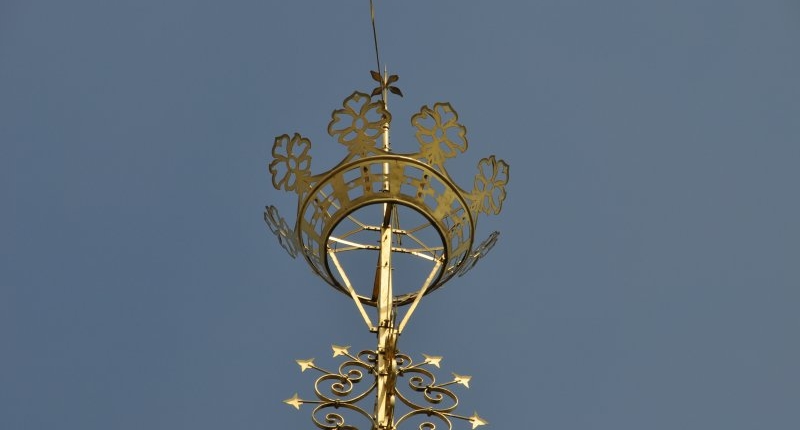 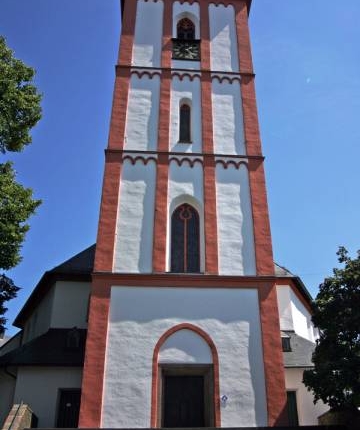 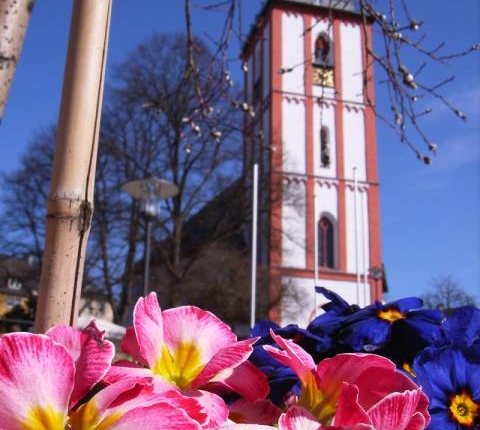 The church is situated on the Siegen market square and was built in the 13th century as the town church of the Counts of Nassau. There, the members of the Protestant line of the House Nassau-Siegen were buried up to the building of the prince grave. The hexagonal ground plan of the church is unique in Germany, although the construction is rather Romanesque. The “small crown“ on top of the tower was donated to the community in 1652 by Johann-Moritz Fürst zu Nassau-Siegen. This also functions as a landmark of the city of Siegen.

The town hall was first mentioned in a document in 1303, but its origins probably date back to before 1224. At that time the town hall was used as usual for administration and trade. However, the building was also used as a prison, courthouse, meat bank, armoury and ballroom. The building was almost completely destroyed in a bombing raid in 1944. Between 1947 and 1957 it was rebuilt and extended. In 1999/2000, the market square was redesigned and has since served as an attractive venue for events.